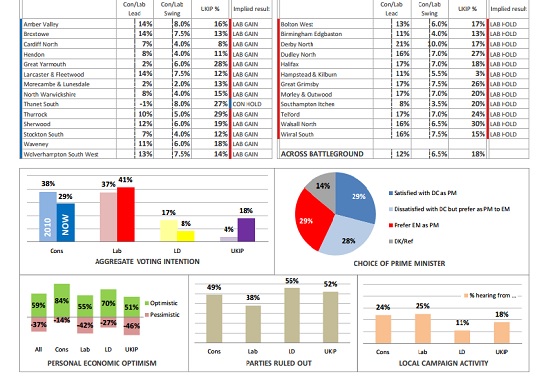 Lord Ashcroft’s has published his marginal polling. The poll contradicts the findings of the ComRes marginals published earlier on this week, and the sample size here is nearly 26 times larger than the ComRes poll. This polling findsÂ a 6.5% swing from the Conservatives to Labour â€“ enough to topple 83 Tory MPs and give Ed Miliband a comfortable majority. 26,025 people were contacted by phone between 31st of March and the 18th of May.

Given the collapsing leads and occasional Tory leads in the regular Westminster VI polls and the mere 2% lead in Projected Share of the National Vote in the locals, this will give Ed and Labour supporters a lot of reassurance.

Labour has a 10% lead when the generic voting intention question is asked, and a 12% lead Â when asked andÂ thinking specifically about your own constituency and the candidates who are likely to stand there, which party’s candidate do you think you will vote for in your own constituency, which implies incumbency won’t be helping the Tories.

One other interesting finding was Lord Ashcroft polled Thanet South and Great Yarmouth, seats where UKIP are predicted to do well in, UKIP aren’t winning either, but in my opinion, they are within touching distance of making them three way marginals, with the right candidate and campaign, they could win, but this was all before their vote share fell by a quarter in the last year according the National Share of the Vote.

For those Tory strategists hoping to use a vote Kipper, get Miliband campaign on the Kippers, to get UKIP supporters to vote Tory at the General Election, such a strategy may not work. The preferred government of UKIP supporters is below, as we can, see there’s not much between Con and Lab.

That said, 45% of UKIP supporters prefer Cameron to Miliband, whilst 24% prefer Ed to Dave, with an additional 18% satisfied with Dave.

Before the Reds or Blues (and Kippers) get overexcited or too despondent by this poll, it is worth remembering, a poll in September 2009 of nearly 35,000 respondents had the Tories on course for a majority of 70, nine months later, we all know what the actual result of the General Election was.

As the good Lord notes

The research also found that most voters in these seats are optimistic about the economy, and only three in ten would rather see Mr MilibandÂ as Prime Minister than David Cameron.Â As I have found in the Ashcroft National Poll, half of voters say they may change their mind before the election â€“ and there is still a year to go.