YouGov recently ran a competition, open from January 17th-31st, that asked participants to estimate the end-of-year voting intention figures to win a prize, after Steve Thompson won last year’s competition by guessing each party’s position exactly (except for UKIP â€“ he was 2 points high). The same question was then asked to the general public in a nationally representative survey.

The predictions, averaged together, give a window into what direction British people see the winds of political change heading this year, in the run-up to the general election next May. And if the popular wisdom is correct, the Conservative Party will be within striking distance of a lead, but really 2014 will be a year for the ‘alternative’ parties.

These are the results 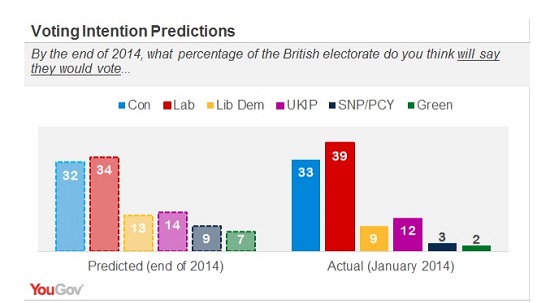 For me this was the most interesting revelation, the predictions broken down by voting intention. “However, the topline figures belie the extent to which the challenge may been an exercise in wishful thinking for many. Looking at the predictions of people who currently intend to vote for each of the four main parties paints four very different pictures of where Britain will be in ten months.”

As we can see, when you’re a supporter of a party, you are forecasting them to do better in the polls than the supporters of the other parties. That’s something we should consider when we all make political predictions and perhaps the best course of action is to start listening to the predictions of those who aren’t aligned to any party for a realistic prediction. I look forward to reviewing what the actual YouGov polling shows in December 2014 and comparing to this forecast.