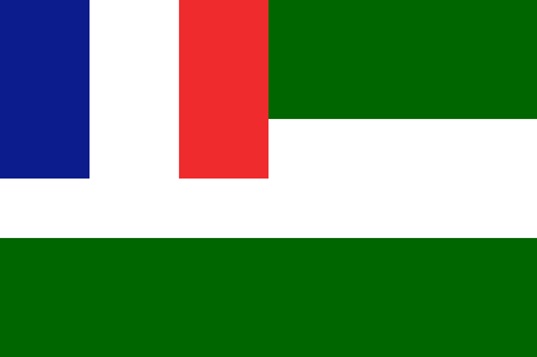 (Flag of Syria under French Mandate – From Wikimedia Commons)

Imperial echoes in the Middle East

Much of the debate surrounding potential military action in Syria has focussed on two aspects: what effect would such action have, and would it be lawful as things stand. In a sense, the two are linked in an unusual way. The normal reasons for intervening militarily are for one government to force a change of policy upon another, or to impose a settlement on an area.

Although thereâ€™s been some talk about deterring Assad from authorising further chemical attacks through air- or missile-strikes, those same politicians have been much quieter about they envisage such action affecting the situation on the ground.

And not without reason: Syriaâ€™s civil war is one that Western governments are keen to see end but distinctly less enthusiastic about seeing either side win. Changing the situation on the ground by striking against the Assadâ€™s forces not only makes it more likely that his opponents will end up victorious but makes those governments involved partly responsible for the outcome â€“ which could place some highly unsavoury characters in power.

Hence the attempt to raise the level of debate from that of power to one of justice, where the air-strikes arenâ€™t about intervention but punishment for a crime against humanity (ignoring the fact that whatever the justification, the effect will be the same). Under such thinking, the strikes cease to come from an active participant but from a higher authority, concerned with means rather than ends.

The problem with that is that those who would see themselves in such a role are self-appointed. There is no United Nations backing for air strikes (indeed, the Security Council hasnâ€™t been able to pass any resolution on Syria for over a year), nor are states enforcing the verdict of some international court.

The argument advanced is that the action is justified by the Duty to Protect, though itâ€™s dubious just how far citizens will be protected by the lobbing of even more explosive into the country. There is also rather a biting irony of states wishing to impose a quasi-judicial sanction on a regime, while quite possibly acting outside the law in doing do.

Not that outside intervention is a new thing to Syria. From its incorporation into the Roman Empire by Pompey in 64BC, that part of the Middle East spent almost all of the next two millenia under the sway of one imperial power or another based far from Damascus. Most recently, after the collapse of the Ottoman Empire, it was a French League of Nations mandate.

One has to wonder whether that has anything to do with the current French governmentâ€™s keenness to be involved. Ten years ago it was the British government participating in a war in its former Middle East mandate next door, so whether by chance or design thereâ€™s a pattern there and one which is unlikely to have gone unnoticed within the region.

Thanks to Double Carpet, you can view the results of the Australian election, live, here