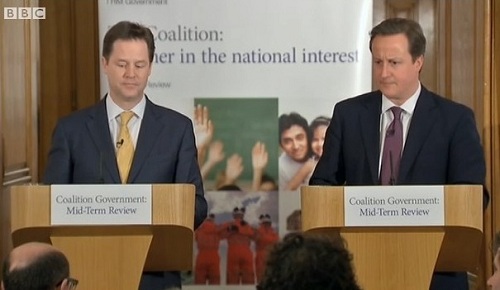 Is the immigration debate symptomatic of a larger problem?

The furore that has blown up among those whoâ€™ve noticed the two news stories connected to immigration this week is a good example of the problems the Conservatives face in winning an outright majority at the next election.

On one level, the challenge is not too difficult, despite the boundary review not being completed.Â  If the economy continues to recover, with either living standards improving or at least the prospect of them doing so in the offing, with Labourâ€™s economic policy at best wobbly, with Labour no longer benefitting from the aura of office (and with that aura transferred to the Tories and, to a lesser extent, the Lib Dems), and with Ed Miliband not setting the world alight as Leader of the Opposition, gaining the extra seats should be at the least a very possible outcome â€“ and the odds suggest plenty of people think so.

And yet.Â  Unlike in the past, the Conservatives are faced by credible challengers from both the left and right, with swing voters able to drift off in both directions.Â  Preventing that from happening is key to Cameron remaining in Downing Street, never mind winning an overall majority.

Why then the two immigration stunts, at least one of which has been authorised at a high level?Â  Being seen to be doing something about an issue some of the public care about is always tempting, especially if thereâ€™s a risk that an opponent might make the running on it.Â  The risks however are that it turns off those at the opposite end of the spectrum to those being targeted (potential UKIPpers for gay marriage; Lib Dem and Labour floaters for immigration, for example) without attracting enough of those who may find it attractive.Â  On the contrary, simply raising the issue can highlight the challengerâ€™s strength on the subject.
‘

What then is the answer?Â  Put simply, itâ€™s the magic bullet of government but only when allied to competence.Â  The other parties may talk of what they would do but with the exception of the Lib Dems, they canâ€™t prove it.Â  Labour can point to their own record in office but on both the economy and immigration, itâ€™s not one that is likely to be seen as without blemish in the eyes of those who care about the issues (itâ€™s rather better on gay rights but there arenâ€™t too many votes to be won there).

Keeping both wings of the Conservative coalition satisfied is therefore no simple task, one made all the more difficult by the constraints of coalition.Â  But then as someone once said, if you canâ€™t ride two horses, you shouldnâ€™t be in the circus.Â  One canâ€™t help but notice the contrast in the Toriesâ€™ recruitment of both Lynton Crosby and Jim Messina in that context.Â  If ever there was an example made flesh of the intention to ride two horses, thatâ€™s it.