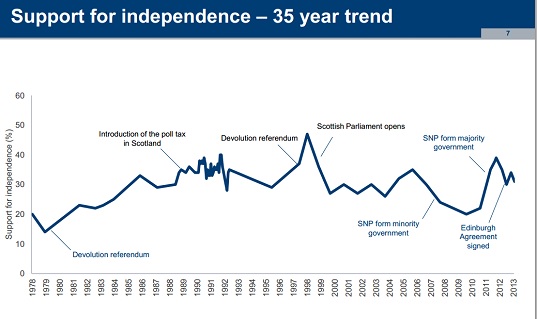 Over at the Spectator’s Coffee House, Alex Massie has written a piece about the forthcoming referendum following on from the viewing of the first part of the documentary called the Road to referendum, which can be viewed here.

If stories matter in politics â€“ and I think they do â€“ then one of the largest problems facing Unionists is their lack of a narrative. What future are Unionists selling? By contrast â€“ and as last nightâ€™s programme demonstrated â€“ Â the nationalists have it easy.

Which is why I donâ€™t think the present opinion polls matter very much. The campaign is only now shifting to prime time. As I say, (at least so far) nationalists should be delighted withÂ Road to ReferendumÂ (thereâ€™sÂ an accompanying book too) and Unionists should be troubled that theyâ€™ve not got a counter-narrative to sell themselves. Or, rather, theyâ€™ve nothing thatâ€™s quite as attractive or powerful as the idea of a great national Â journey

If he is right, then the best odds on Scotland voting for Independence is 10/3 with William Hill

Mike Smithson is currently on holiday