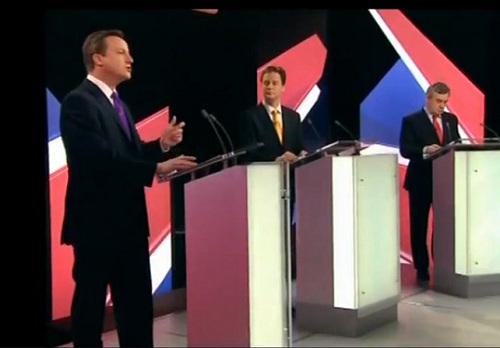 There’s a report in the Independent this morning which says

Amid increasing signs that the Conservatives would pull the plug on televised leadersâ€™ debates if Mr Farage was included, the UKIP leader said he would be prepared to challenge efforts to stop him taking part in the courts.

There’s a new poll out tonight by ComRes for the Daily Express highlighting the dangers for Dave of appearing to be reluctant about taking part in election TV debates. The 67%-12% split saying he would appear a coward if not there is quite emphatic.

What appears to behind the Tory reticence is

Focus groups conducted by the Tories are understood to have re-enforced the arguments of those in Downing Street who say they could give Ed Miliband an electoral advantage.

Party strategists showed short clips of Mr Miliband taken from news programmes and asked voters to rate the Labour leader. The groups were then shown longer videos of his speeches and question-and-answer sessions and asked whether it had changed their views.

Sources said that voters in the focus groups had an overwhelmingly more positive view of Mr Miliband when shown the longer films.

A Downing Street insider said: â€œIf you only watch Miliband for a couple of minutes the first thing you think is that he looks a bit odd and sounds a bit odd and you donâ€™t really listen to what he says.

â€œBut when you see him for longer you start listening properly and he tends to have a more positive response.â€

David Cameron should also remember, in 2009, the broadcasters threatened to empty chair Gordon Brown, if he didn’t participate in the debates.Â

There are plans afoot for a leaders’ debate, including Farage ahead of the European elections next year, so we may get a preview of what the debates in 2015 maybe like.

John Rentoul in response to the Independent article this morning, has done a blog entry on this topic, and the headline is “TV Debates: Not Going to Happen”