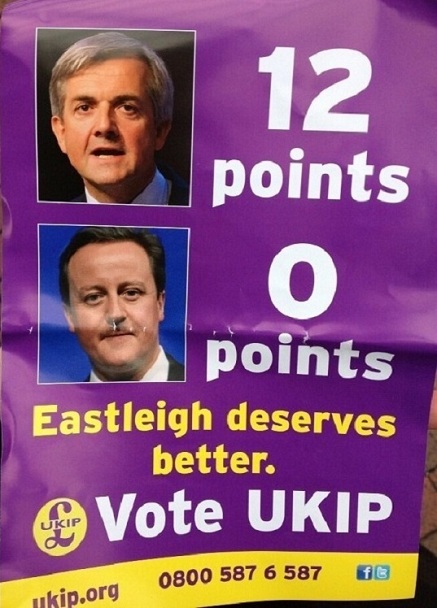 According to the Telegraph, UKIP has sent out the above leaflet.

Saying Eastleigh deserves better. It certainly does. The leaflets have been put through doors in Colden Common, which is not part of the Eastleigh constituency.

Given the gimmicks UKIP have used in the past, it isn’t surprising they finished third in a two-horse race in Buckingham.

What makes this mistake in Eastleigh even more alarming for UKIP was that Mike Smithson was told last week.

#Eastleigh, I’m told, is amongst the best organised areas for Ukip in entire country

Â  Â  Compare and contrast how John O’Farrell is campaigning.

Out on the #LabourDoorstep – Good response on #Labourdoorstep in #Eastleigh today. A lot of previous Lib Dem… tmblr.co/Zn1f0te3dv78 â€” John O’Farrell (@mrjohnofarrell) February 13, 2013

Taking all of this on board, it definitely is worth revisiting the vote match markets and backing Labour to beat UKIP, as these aren’t the sort of mistakes the Tories, Labour or Liberal Democrats would make.

Hat tip toÂ hyufd for alerting me to the leaflet story on the overnight thread.