The Three letters of David Cameron

When David Cameron won the Conservative party leadership contest he said he could state his priorities in three letters: NHS. More than any other issue, from the Big Society to hugging huskies in hoodies, he’s tried to connect himself to the state of healthcare in this country.

While prescribing declaring cuts had to take place in almost every other department he declared he would protect the NHS by ring-fencing its budget. It is a personal crusade (he has talked about how his experiences with his son made the issue so important to him), it is central to his campaign to de-toxify the Conservative party, with the Stafford hospital report published it is very much on the agenda.

From a polling standpoint on YouGov’s issues tracker it ranks as the 2nd most important issue facing ‘you and your family’ (behind the economy) and 3rd facing the country (behind economy and immigration).

But has Cameron’s focus on the issue been successful?

Or at least has it been popular (in politics the two are so entwined with each other). Below are graphs tracking the Conservative score, and Conservative lead (either positive or negative) over Labour, I’ve drawn them from YouGov’s recent tracker (which since early 2010 has regularly been tracking issue ratings, and infrequently in between 2005 and 2010) and Ipsos Mori’s unparalleled historical data which covers a much longer time span but always infrequently. 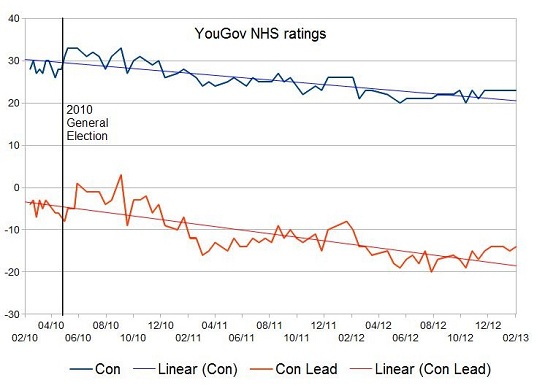 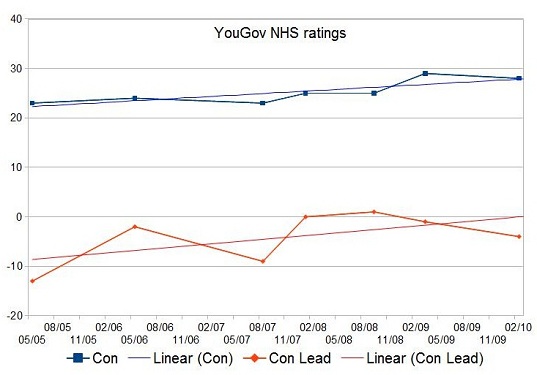 What we can see here is just how badly the Conservatives have rated on the NHS, since 2005 and including 75 polls taken since the start of 2010, they have one instance of being level with Labour, and three of leading them (with leads of 1, 1, and 3). The other 71 polls have them behind (even while they were leading in voting intention polls).

Cameron’s time as Leader of the Opposition up to the early years of his premiership show some sustained improvement in the Conservative ratings (and that helping to drive a similar level of improvement in the gap to Labour) with the caveat that given how the polls since 2010 jump around the infrequency of the polling 05-10 casts a bit of doubt on reading too much into it.

From the start of 2010 we have much more frequent data that places them mildly behind Labour up until the election and improving after the election through to that autumn, but then turns downwards and heads below even the 2005 ratings. 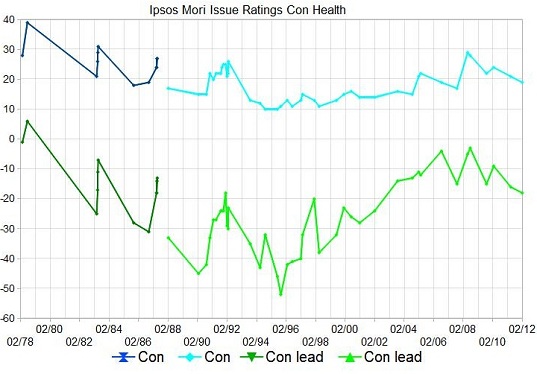 What the longer historical perspective offers is a suggestion that Cameron is still performing relatively well even after his decline, remaining higher than all the ratings apart from Major’s stretch before the 1992 election and his peak the highest Conservative rating of the past 25 years (and comes outside of election time, while the other Conservative high points cluster around elections).

The leads (fairly unsurprisingly) tell a broadly similar story, that Cameron’s worst result (or conversely Miliband’s biggest lead) is better than any other since the 1980s.

That is certainly the most positive way of interpreting this data (it also depends on how much you think the change in wording has changed the results) but for all Cameron’s efforts on what in many ways has been his flagship project, I think he’ll view these figures (and hello to Dave if he’s reading, or Samantha for that matter) with some disappointment.