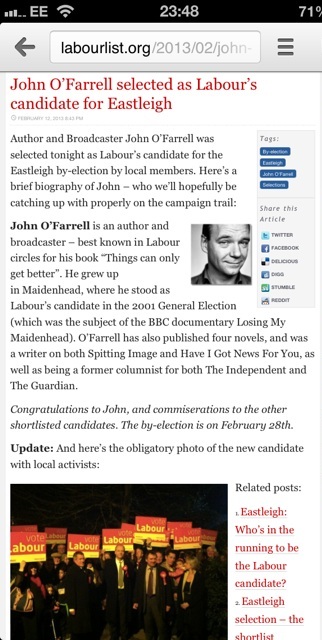 Last night Labour selected John O’Farrell as their candidate for the Eastleigh by-election, thisÂ predictablyÂ attracted a lot of comment, and some movement in the betting.

Such as the below tweet by the Political Editor of the Sun.

By selecting John O’Farrell, have Labour made #Eastleigh a Tory win? He’ll take 1,000+ votes off the Libs. Tories delighted.

My first instinct was to back Labour on Ladbrokes’ match vote bet with UKIP, and Betfair’s Eastleigh by-election winner without the Conservatives and Lib Dems.

Part of this is based on my enjoying some of Mr O’Farrell’s books and performances on television, particularly on Have I Got For News, and he is not a first time candidate, have previously contested Maidenhead in 2001, against the current Home Secretary, Theresa May.

How this will play with the voters of Eastleigh is another matter, as this so far is shaping up to be a very local orientated by-election, with the Tory and Lib Dem candidates being local/established with Eastleigh.

An outsider, from London, with no apparent links to the constituency, will play with the local voters will be interesting, I suspect it will enthuse the local Labour activists more than the local electorate.

Hopefully we should see some more polling on Eastleigh in the upcoming days, and we might see what effect Mr O’Farrell’s selection will have on the polling.