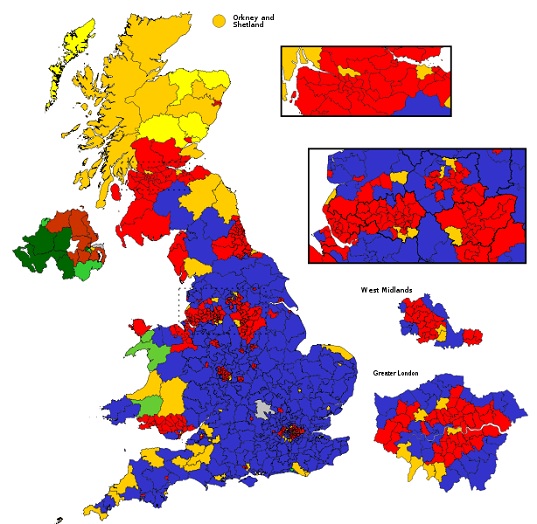 The map above shows the 2010 General election results, and shows Labour’s lack of seats in the South, a couple of years ago, the always perceptive Antifrank made thisÂ observation, which stuck in the mind, and puts the map into context

Labour did appallingly in the south of England. In the south east, south west and eastern England combined, it won 10 seats. There were 197 on offer.

Holding the 32 seats it lost in these regions in 2010 would have made it the largest party instead of the second largest party.

Moreover, in a three party race, it got a smaller percentage of the vote in the south east and the south west (in 139 seats) than the Conservatives managed in Scotland in a four party race (in 59 seats).

Fewer than one in six voters in the south east and the south west voted for Labour. This was a near extinction level event.

In today’s Times (Â£Â£), John Denham talks about the review, ordered by Ed Miliband in September as part of his â€œOne Nationâ€ initiative, that is being overseen by himself and Â the partyâ€™s General Secretary,Â Iain McNicol.

Ed Miliband and the Shadow Cabinet have been told to stop talking about the â€œNorth-South divideâ€ after the party discovered that it was alienating voters in the South of England.

Senior Labour figures are also under instructions to use more anecdotes about the struggles of southern voters in their speeches, as part of the partyâ€™s attempt to win back support beyond its northern heartlands.

In the article, Mr Denham says

Will the anecdote approach work? Â It looks like we will find out, as we are set for a barrage of them from Labour party spokespeople.