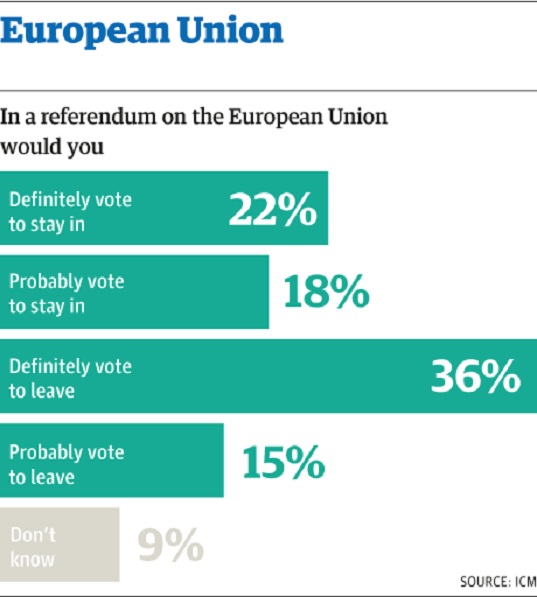 As we are a few days away from theÂ fortieth anniversary of The United Kingdom joining the EU, theÂ Guardian has some polling by ICMÂ on the EU.

The public mood of Euroscepticism is hardening, according to an exclusive Guardian/ICM poll that finds 51% of respondents would vote to take Britain out of the EU, against just 40% who say they would vote to stay in.Â

As the Guardian notes

This marks a turnaround from similar polls conducted in the earliest years of this century. When ICM asked a slightly differently worded question in May 2001, the public indicated that it wanted Britain to remain a member ofÂ EuropeÂ by 68% to 19%.

Back in 2009, the Lib Dem European election manifesto contained this pledge

Liberal Democrats have argued for a referendum on whether Britain stays in or leaves the EU. We are the only party confident enough to put the pro-European case to the British people on the big issue facing us â€“ and let the people decide. Britain will only win the case for a flexible, democratic Europe in Brussels if we settle our arguments at home on whether we should be part of the EU or not.

If they reminded the electorate of this proposal, and enacted it, it might represent an opportunity for the Lib Dems to regain some popularity, it also may have the ability to wrong foot David Cameron, before his much anticipated speech on the EU in the new year.