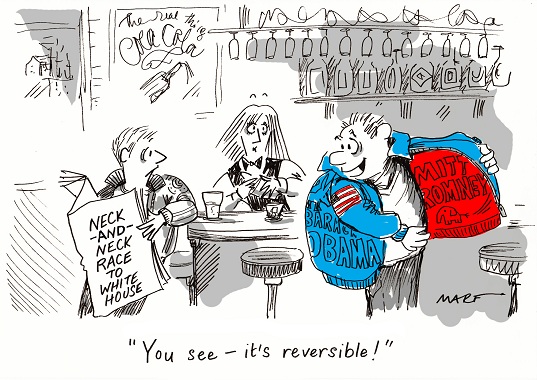 The swing states are getting tighter

A number of poor swing state polls for Obama in the past 24 hours has caused me to switch my betting so that whatever happens I win the same amount.

I am able to do this because over the last year I’ve traded in and out of different contenders and have what’s described as an all green book at Betfair.

The Romney campaign’s TV strategy in the battle-grounds has always been to spend the most in the final three weeks and that is starting to click in.

So we have a situation at the moment where the Romney lead in the national polling is moving downwards whereas the Obama position in the swing states is getting tighter.

So much depends on the ground war and here the evidence is that the President has put in more resources – certainly in terms of the offices that it has established.

But this battle, as the polling has shown is remarkably tight, and I find it difficult to make a call – so opting for safety is the best option at the moment. I might change my mind as we get nearer the day but for now my betting position is neutral.