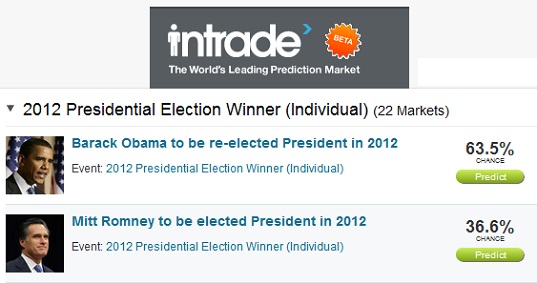 One of the betting oddities on the 2012 White House race has been why the Irish exchange, Intrade, has been so out of line with Betfair, other bookies and in the US the Iowa Electronic Markets – something that I looked at nearly a month ago in a piece for the Telegraph.

The gaps have been so large that it’s been hard to explain why punters there have been ready to risk money at much poorer odds for Romney when so much better value was available elsewhere.

Now the Intrade differential is being eroded and the prices above show the latest this morning. It is still stronger for Romney than Betfair’s current 32% but the gap is nowhere near what it was.

At one stage last week the Intrade Romney price was showing a 44% level which was eight points better.

Such a drop on a market as large as Intrade suggests that there’s been something of a panic amongst those betting that Romney will do it.

One poll that seems to influence Intrade punters more than others is the regular survey from Fox News. The latest, which came out overnight, has more gloomy news for the Republican challenger.

The details of the poll were quite dramatic showing how this is become a battle of the demographic group. Obama leads Romney among all women by 14% and unmarried women by 38%. The president also has big leads amongst those with annual incomes below $50,000 (+18%), young voters under age 30 (+25%) and black voters (+89%).