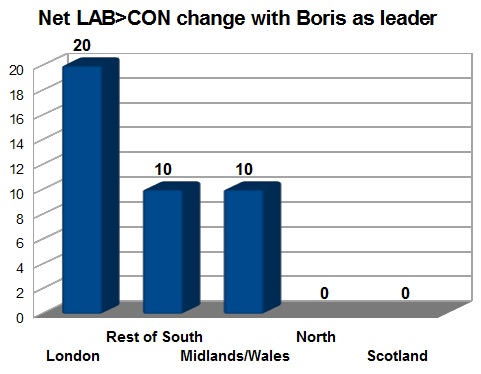 Northern voters are less enamored with the Mayor

The detail of YouGov’s poll for the Sun is on the previous thread. The big news is that with Boris rather than Dave named as Tory leader the blue team would be just 1% behind Labour rather than 8% when the current leaders are named.

That’s certainly quite dramatic but from the poll detail, just out, it’s clear that this was a very regional thing.
The chart above is taken from the YouGov detail of their Boris poll and shows the net LAB to CON moves that the survey recorded in each of its regions.

Boris demonstrated last May how he has, in London at least, the ability to touch supporters of other parties hence his ability to hang on when nationally things were very gloomy for Tories.

But the regional splits, shown above, must raise question about the overall impact of a Boris leadership in terms of seats.

The big clusters of marginals are in the Midlands and in the North West and Yorkshire and these are where the Tories need to be doing well just to retain their gains from 2010.