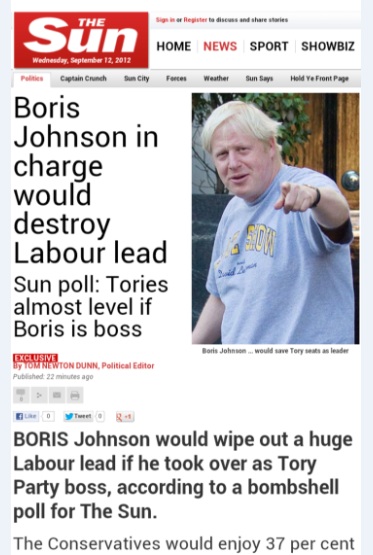 There are two big reasons why the Sun poll on the impact on voting figures of a Boris is significant:-

It points to the extent that Britain’s biggest-selling paper is getting behind Boris in an effort to have him replace Cameron as Tory leader – something that Rupert Murdoch is said to want.

Secondly the numbers themselves could fan the fire of rebellion amongst those Tory MPs who believe that the party’s main chance lies with a change at the top.

After all if you are a Tory MP in a marginal seat, particularly one of those won at the 2010 election, the idea that switching leaders might wipe out Labour’s lead and thus help save your job could sound very seductive.

People don’t just vote for parties – they vote for a leader. For many, as we saw in Scotland in 2011, the choice of who would be Scotland’s First Minister was more important than sticking with normal party allegiance and Labour’s vote collapsed.

The last time that named leader questions were prevalent was in the period leading up to Tony Blair’s exit in June 2007. Poll after poll from a range of pollsters suggested that Gordon Brown would be an electoral liability. This proved to be remarkably predictive once the Gordon honeymoon was over.

Five years ago Labour MPs chose to totally ignore the clear evidence from the polling and gave Brown the leadership without him having to fight a contest. Many of those MPs went on to lose their seats.