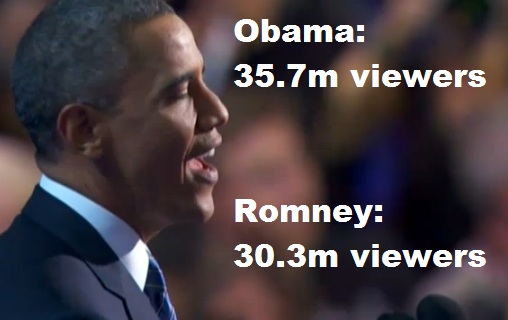 But both Romney and Obama well down on 2008 ratings

The TV audience figures for the final night of the Democratic convention are out and we are able to make comparisons between Romney and Obama and with how many watched four years ago when John McCain was the GOP nominee.

Barack Obama’s speech on Thursday night attracted 35.7m viewers which compared with 38.4m at the 2008 convention.

Mitt Romney’s speech last week had an audience on 30.3m viewers which was well down on the 38.9m who watched John McCain four years ago.

I think that what this shows is the reduced level of interest in the election which is going to be decided by turnout. Who can get most of their votes out in the crucial swing states?

Betfair punters now give Romney a 33.8% chance of victory – nearly four points down on his price just before his convention speech.

The next big event in the campaign will be the first TV debate on October 3rd.