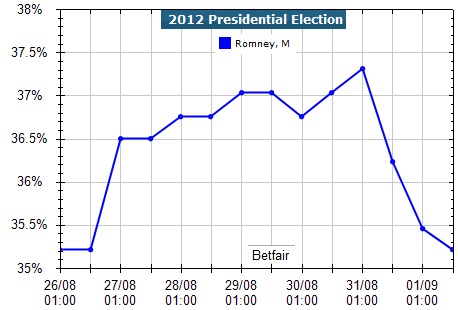 But does Mitt have a better than 35% chance

Sometimes betting price change charts can be very telling and the one above shows how the Romney White House race odds changed during the party convention in Tampa last week.

The Betfair prices are shown in terms of an implied probability and as can be seen Mitt was having a great convention until the moment he stood up to speak.

This all seems to be in line with the polling. The leading US election analyst, Nate Silver, notes that Romney’s convention bounce is small to say the least.

The GOP contender’s best position is with Rasmussen which has Mitt 3% ahead. But as Nate points out only about a third of the interviews took place AFTER Romney’s acceptance speech.

Nate’s model currently gives Romney a 26.9% of taking the prize in November.

The critical thing is the swing state polling and we should be more of that in the next few days. The Democratic party convention starts on Tuesday.