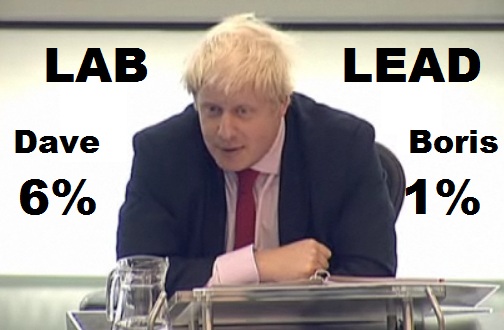 Now some data to drive the Boris for leader campaign?

YouGov has just revealed further data from its latest which suggests that the Tories would be doing markedly better if Boris Johnson rather than David Cameron was the leader.

Then a second question was put which said “Imagine that at the next election the party leaders remained David Cameron for the Conservatives, Ed Miliband for Labour and Nick Clegg for the Liberal Democrats. How would you vote? This had the Tories doing better but still behind. The shares were CON 34: LAB 40: LD 10.

What I find most disconcerting about these numbers is the difference between the first two findings. It doesn’t seem right.

Whatever this is just the sort of poll finding that will drive the move that’s been reported to replace Dave.

Yesterday we were told that the owner of the Sun, for whom this polling was carried out, Rupert Murdoch wants a change at the top.