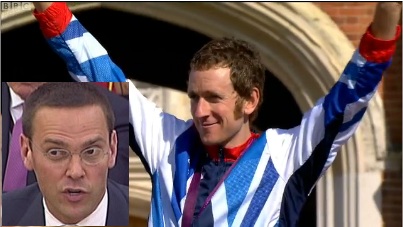 His support was central for Wiggins & co

James Murdoch, son of Rupert, has had a pretty rough year in the UK so much so that the part that he personally has played in the development of British cycling is perhaps overlooked.

For it was James Murdoch’s decision after the 2008 Olympics to invest â‚¬15m a year in the creation and ongoing funding in Sky ProCycling that has been central to Britain now being the world leader in road cycling.

It was not without accident yesterday afternoon that three of the top six in the time trial – Wiggins, Froome and Rogers – were TeamSky riders and had all benefited from the extraordinary structure that David Brailsford, who’s in charge of both the GB and Sky teams, was able to bring.

As the Guardian, no friend of News International, reported after the Tour de France, “it was Murdoch, a keen cyclist, who was critical to sustaining the media group’s sponsorship commitment”

I’ve noted on PB before that road cycling is my overwhelming sporting interest and on a number of occasions in the past we’ve been to France to follow the Tour. The success we are seeing now is something I could never have dreamed could happen in my lifetime.