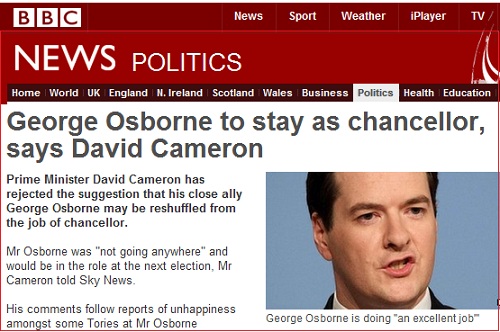 Has Cameron made the right decision?

After all the speculation the PM has said that Osborne stays as chancellor – not just for now but until the general election. This is the BBC report:-

“..Mr Cameron, asked during a visit to the Olympics whether Mr Osborne would be staying in his job, said: “George Osborne is doing an excellent job in very difficult circumstances and he has my full support in going on doing that job.”

Asked if Mr Osborne would be chancellor at the next election, which is due in 2015, Mr Cameron said: “He’s not going anywhere… yes.”