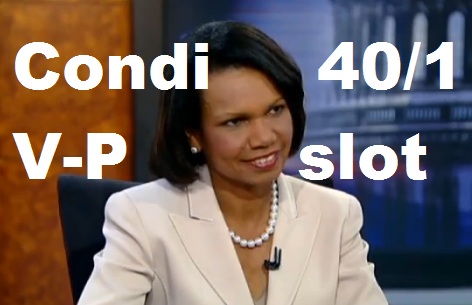 Is she the woman Ann Romney was hinting about?

Ever since Ann Romney’s July 4th TV interview in which she hinted that her husband might choose a woman as his running mate there’s been a lot of speculation over who that could be.

The questions are how much can we read into her comment and who could she be talking about?

One piece I found persuasive is this from the respectedÂ commentatorÂ William Kristol in which he looks at the chances of Mitt choosing the ex-Secretary of State, Condi Rice.

“Rice wowed the crowdâ€”and seemed to impress Mitt Romney, who was standing beside herâ€”when she spoke in a featured role at aÂ Romney campaign event two weeks agoÂ in Park City, Utah. Rice is qualified, would be a poised (if novice) candidate, and would complement Romney in terms of area of expertise, gender (obviously!), and life experience. Rice offers an unusual combination of being at once a reassuring pick (she served at the highest levels of the federal government for eight years) and an exciting one.

It’s that final point that clinched it for me – certainly to risk a few pounds. Romney is known to be driven by data and these numbers are emphatic.

Whatever Condi at these prices is worth a punt and I have abandoned my previous resolve not to get involved in this market.