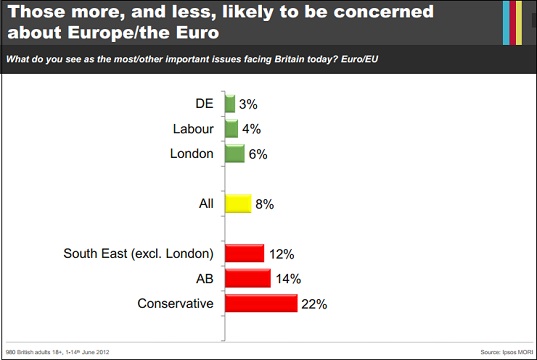 Why the big MORI difference between the parties?

The monthly Ipsos-MORI issues index for June is just out and concern about the EU/â‚¬ than has edged up 2% to 8% – where it was in April.

This polling has been carried out in exactly the same way for more than a third of a century and involves asking people to name a many issues that concern them without being prompted.

Given how the Eurozone crisis has dominated the headlines the relatively low level of concern EU/â‚¬ is quite remarkable.

What’s even more striking is the different response levels from different polling segments in the chart above and the very differing views of Conservative and Labour voters.