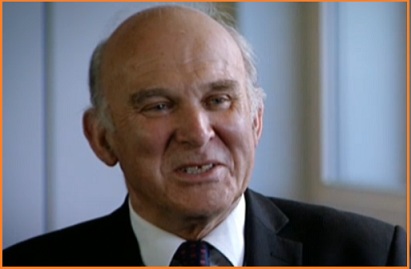 Over at the Guardian, Polly is offering advice to Vince Cable, the headline says

But if Vince Cable leads an anti-austerity rebellion, he can help save his party and the UK economy too

Last week we had Vince publicly discussing that the coalition would disengage before the General Election, and over the weekend a story emerged Vince and other Lib Dems were having secret talks with Labour, then you have to wonder if Vince is onÂ manoeuvres?

It isÂ understandableÂ if he is, given that the last traditional ICM poll had the Lib Dems on 11%, their lowest score in 15 years, other pollsters have UKIP slightly behind or just ahead of the Lib Dems.

The best price on Vince to be the next Lib Dem Leader is 16/1 with Stan James and Paddy Power.

He did the job on a temporary basis in the last parliament, and came up with the best political line of that parliament when he said to Gordon Brown

“The house has noticed the Prime Minister’s remarkable transformation in the past few weeks – from Stalin to Mr Bean.”