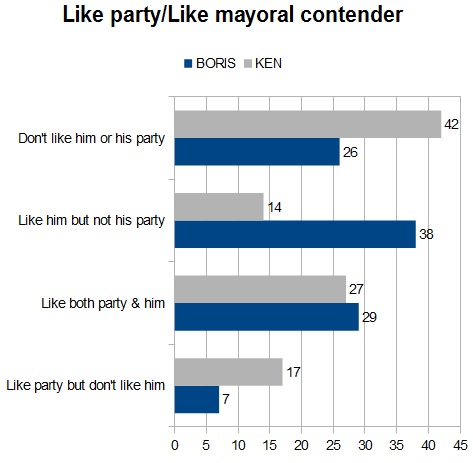 How can he compete with the likable Boris?

There’s a new ComRes poll for the London mayoralty which has, in the final two forced choice, Boris beating Ken by 53% to 47%.

More interesting, given the importance of leader ratings in predicting outcomes, are the like him/like his party responses with ComRes using the format that was developed by Ipsos-MORI.

As can be seen Boris has a massive likability lead over Ken and if the official LAB man makes the final two then he’ll be beaten.

The most striking numbers are the like him but not his party ones. Quite simply Labour have a candidate who is not liked.

The last time that happened was in the Scottish election last May where Labour was leading in the voting intention polls until ten days before voting. The leader numbers told a different story. On the day, of course, SLAB got smashed and Salmond secured an overall majority at Holyrood.