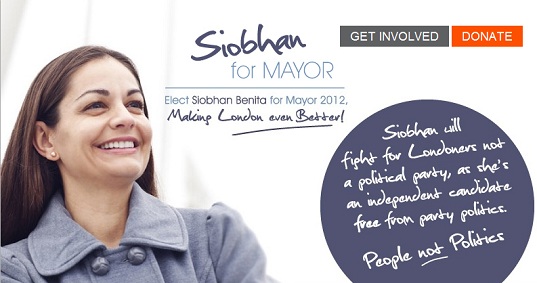 Have you noticed how over the past few days there’s increasing talk about the challenge from the ex-senior civil servant with powerful friends, Siobhan Benita, for Mayor of London?

This is from a two page report from Rachel Sylvestor in the Times over the weekend:

Siobhan Benita is the one to watch. This former civil servant who resigned from the department of health over Andrew Lansley’s NHS reforms is attracting support from some interesting quarters. Lord O’Donnell, the former cabinet secretary is backing her as is Peter Jones the Dragon’s Den…..etc

Benita says that both Boris and Ken who “are acting if they own this job” – a line that could resonate.

The Guardian is campaigning hard against her exclusion from the TV debates and a new backer is the Matthew Taylor, boss of the RSA and former top aide at Tony Blair’s Number 10.

Given that 42 year old Siobhan was an almost total unknown barely a week ago she must have got an impressive operation working on her behalf to be getting so much interest so quickly.

If it continues like this then many more Londoners will be aware of her in the next three and a bit weeks.

We are living at a time of unparalleled unpopularity for the established parties I just wonder whether she’s in with a smidegeon of a chance.

Her best hope is if she can become the choice for Labour-leaners who don’t want Ken. She describes herself as a “natural Labour supporter” and, of course, doesn’t come with any of the baggage that encumbers the Livingstone campaign.

The nature of this quasi-AV election is that voters have a second choice which makes it less risky for Ken supporters to put Siobhan first.