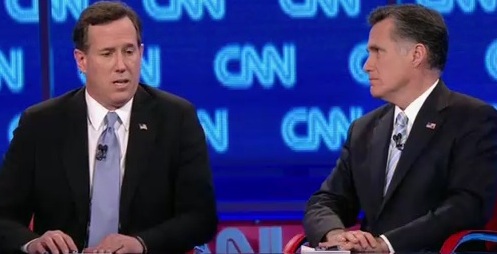 Are we in for a more level playing field after Super Tuesday?

Ever since the 2012 presidential election campaign got underway, Mitt Romney has had the best-funded campaign. That fact, combined with his position as consistently one of the two top-polling candidates and his opponents real weaknesses, has always enabled him to go negative against his principle opponent at the time.

It hasnâ€™t always worked. Caucuses tend to have different dynamics and much lower turnouts, meaning a broad but shallow appeal can lose out to a candidate with a narrower but more fervent base – and winning votes through negative tactics is only ever likely to produce a shallow appeal. Thatâ€™s assuming that the tactics are employed correctly, and thereâ€™ve been a few misfires there too.

However, things may be changing. Romney still pulled in most money in January but not by much, and by nowhere near enough to cover his costs. It might not be critical. Eighteen states go to the polls between now and the middle of March, bringing the total to more than half of the fifty (though only Florida from the big ones). A decisive win on Super Tuesday would go a long way to closing down the battle but the polls suggest that heâ€™s nowhere near that kind of result.

Next week sees primaries in Arizona and Michigan. These ought to have been pretty fertile territory for Mitt – he was brought up in Michigan, where his father was governor – yet until recently he trailed Santorum. If the latest polls are a good guide, Romney will edge out Santorum but by nothing like the comfortable margin he should.

The position in the national polls is even worse for him: Santorum retains a narrow lead. Iâ€™ve said before that national polls donâ€™t matter greatly in a primary season: whatâ€™s key is opinion in the states voting now, not which have already voted or wonâ€™t do so for months. Thatâ€™s remains true but with two big caveats. Firstly, national polls do matter as far as fundraising goes – it is far easier to get donors to contribute to what appears a viable campaign. Secondly, the quality of media coverage a candidate gets varies greatly depending on how seriously theyâ€™re taken, and polling matters there too.

All of which creates a series of problems for Mitt. Not only is his own fundraising struggling by his previous standards, thereâ€™s every prospect that Santorum (who now really does look the settled and final Not Mitt candidate) will gain a relative funding surge of his own.

With national polling tight and few winner-take-all states coming up, the race seems destined to go well into at least April. If so, Romneyâ€™s campaign canâ€™t continue to haemorrhage cash as it has been doing. Admittedly, heâ€™s not short of a few millions himself but itâ€™s not a good sign when a candidate has to spent his own money.

Worse is what it says about the general election campaign. If Romney is struggling to raise cash now, and Santorum always struggled to raise funds, it places Obama in a very strong position with neither Republican candidate apparently capable of tapping a wide donor base. No doubt the GOP will rally around whoever is chosen but will it do so will sufficient dollar enthusiasm? The evidence so far suggests not.