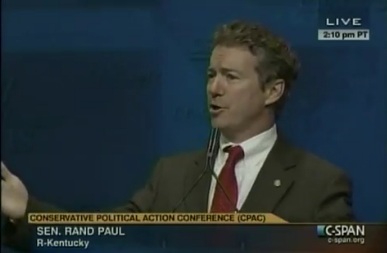 Is daddy sucking up to Mitt so his son can be V-P?

Over the past 24 hours there’s been a big gamble going on for Rand Paul, son of Presidential contender Ron, for the Republican Vice Presidential nomination.

Yesterday I got on with Ladbrokes at a tasty 50/1 – a price that was withdrawn almost immediatly.

What’s driving this are rumours that Ron has agreed a deal with Mitt Romney that sees Rand being guaranteed the V-P slot on the GOP ticket assuming that Romney gets it.

In return Ron is “being helpful” in the campaign

The speculation started almost immediately after Wednesday night’s debate when Ron Paul seemed to be working in tandem with Mitt to undermine Rick. What’s also being questioned is Ron’s negative TV campaign against Santorum when it’s hard to see what political gain it gives him apart from helping Romney.

After staying up to watch the event I was also convinced that some sort of understanding seemed to exist between Rand’s dad and the favourite.

Ever since Ron Paul started accumulating delegates people have been wondering why he’s doing it. What’s the gain? He’s in his 70s and it’s hard to see him wanting to be on the ticket – hence the Rand Paul theory.

I’ve no idea whether this is right – but it’s worth a punt though whether at 7/1 it’s value I don’t know.