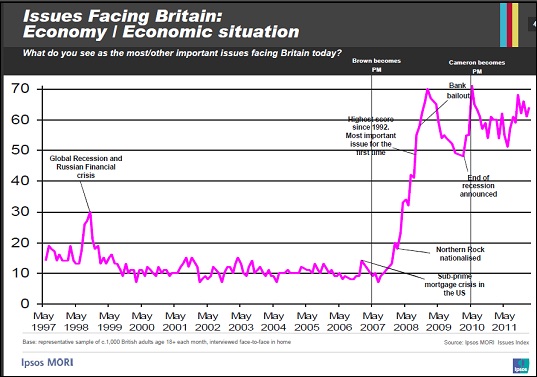 Notice how the tide turned after his June 2007 exit?

The February issues index from Ipsos-MORI came out a couple of days ago with the firm always producing a range of historical charts so we can see trends.

MORI has been asking for 37 years in exactly the same way an unprompted question on what issues interviewees sees as the “most important facing Britain today”.

As can seen the economy moved up sharply in 2008 and has remained high. This latest month it was up 3% to 64% naming it.

Looking at the chart I find it extraordinary how little people were concerned in the first ten years of the 1997 Labour government – the Blair years.

It hovered around the 10% mark for so long and it only started to become a real concern after he stepped down in June 2007.