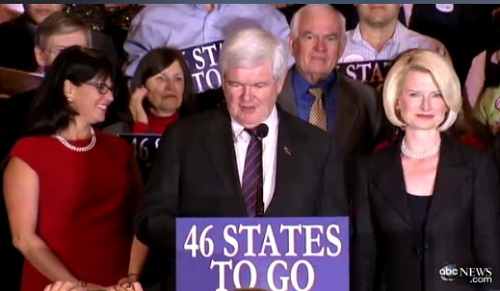 After his Florida thumping Newt says he staying

As expected Mitt Romney won Florida overnight with a fourteen point victory. It was a huge result for the ex-governor of Massachusetts and one, surely, that makes it even more likely that he’ll be the nominee.

But Newt was defiant an hour or so ago. The big message, as seen in the posters in the pictures, was “46 States To Go” – a statement that suggests that he is going to stick with it right through to the party convention in August.

Gingrich might say there are 46 states to go but next Tuesday, in Missouri, his name does not appear on the ballot because he failed to get enough signatures to satisfy the requirements. It’s the same in Virginia in March where an organisational failure means he’ll miss that one as well.

For the hard fact is that only Romney has the organisation and the massive resources to fight all the way.

Everybody talks about momentum in primary campaigns – but the one big characteristic of the 2012 race is that it doesn’t seem to matter so much this year.

Romney won Florida by making Newt Gingrich the issue and executing that in a devastating manner. Is that going to be the pattern right through until the convention? If so there’s going to be a lot more dirt thrown at him in retaliation which can only help Obama’s re-election effort.