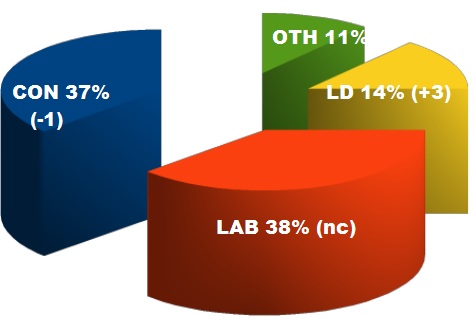 LDs up 3 while LAB regain the lead

There’s a new ComRes telephone poll out for the Independent and the figures, with changes on the last phone poll from the firm are in the chart above.

Not much change except the Lib Dem share moving up 3 to 14%.

The non-VI questions all follow ComRes’s standard pattern of making a statement and then asking whether respondents agree or not. I loathe this approach but it is all we’ve got

Asked whether they trust Mr Cameron and Mr Osborne to make the right decisions on the economy, the response was 35% to 55% disagreeing â€“ a net â€œeconomic trustâ€ rating of minus 20 points.

And so to Florida

Voting has been taking place all day in the four state in the 2012 primary season. The polls close at 0100 UK time when we should get exit poll projections. The big question is the size of Romney’s victory.