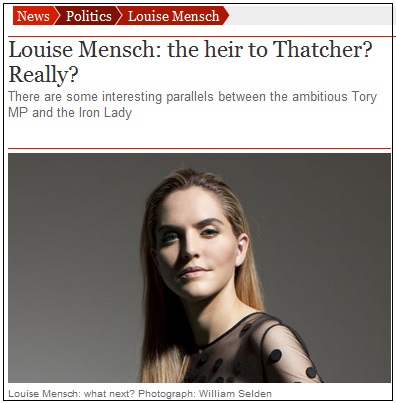 Can she expect preferment in the expected ministerial re-shuffle?

When Conservative MPs return to Westminster after the long New Year break you can bet that one of the main things they’ll be talking about will be David Cameron’s first major re-shuffle of his ministerial team which is expected at some stage during 2012 – probably after the Olympics.

This is the moment when many of the 147 Tory MPs first elected at the general election will be hoping to take their first steps up the ministerial ladder. Being in that initial wave is pretty important for ambitious MPs.

Already the speculation has started with some focus on Louise Mensch – the Corby MP and successful novelist. As Kira Cochrane has noted in the Guardian GQ magazine has declared Louise the “spiritual granddaughter of Margaret Thatcher”.

With the Meryl Streep film on the Tory PM from 1979-1990 premiÃ¨ring in London this week it’s inevitable that comparisons between the party then and now will be made and it’s not surprising that Mensch has been singled out.

But if there is a re-shuffle how strong are Mensch’s chances? A challenge, of course, is that Cameron had few places for Tory MPs at his disposal because of the coalition. The competition will be even tighter.

What do you think. Will Louise be amongst the first of the 2010 intake to get promoted?