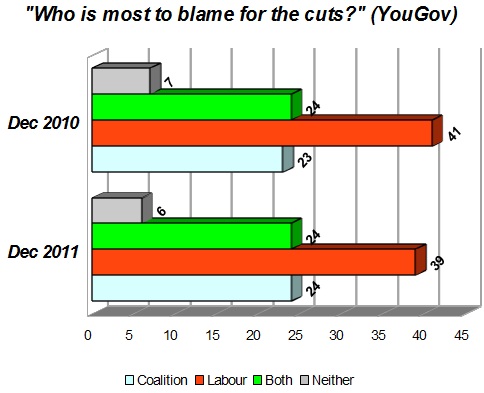 A year on and the polling’s almost the same

Every fortnight since the first coalition budget YouGov has been asking the same question in the same format “And who do you think is most to blame for the current spending cuts?”

The response options have been the same: CON-LD coalition: Labour: Both: Neither: Don’t know.

What’s been remarkable is how consistent the response pattern has been. Thus the latest figures are very similar to what respondees were saying a year ago – getting on for 40% blame Labour with 23/24% blaming the coalition.

In that time, of course, Labour has replaced its shadow chancellor with the abrasive Ed Balls and for whatever reason the party continues to get the blame.

I regard this as the biggest challenge facing the red team. The economy dominates almost everything and Labour needs a more refined rhetoric.

The fact that the coalition continues to have such a dominance is surely the biggest challenge.