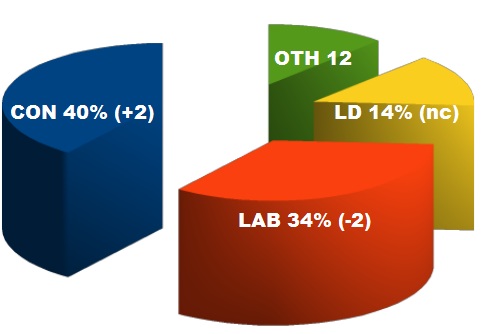 A new ICM poll for the Sunday Telegraph has the Tories opening up a gap of six points over LAB with the LDs standing still at 14%.

The is the first survey by the pollster since Cameron’s Brussels veto and it’s the best Tory position in any survey since the first coalition budget in June 2010.

Many regard ICM as “the gold standard” and in May got the AV referendum right to within a stunning 0.1%. It was joint equal for accuracy at the 2010 election and is taken most seriously by all the parties.

It operates differently in several ways from other firms. What’s probably made a difference here is that ICM discounts by a half the views of all those surveyed who did not vote at the last election.

The poll had 43% of women saying they would vote CON compared with 39% of the men.

Since the veto just nine days ago there has been a pretty consistent picture coming from the polling firms that have reported. None, however, has anything like a margin as large as this.

For Labour this could spark off a lot of soul searching and possibly put the leadership under pressure.