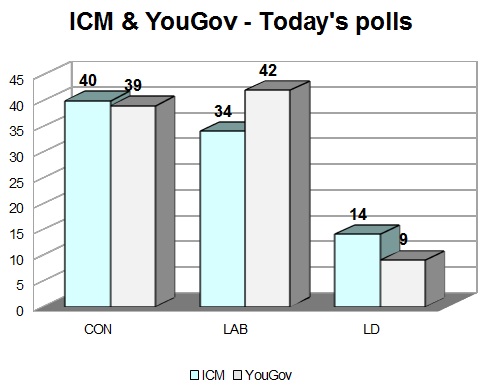 Why do the two firms have such different figures?

Overnight I’ve received quite a few Tweets and emails asking if there’s an explanation for the very different voting intention figures in the polls for today’s papers. ICM in the Sunday Telegraph has a 6% CON lead while YouGov for the Sunday Times has LAB 3% ahead.

We all, I guess, know that ICM carries out its voting surveys by phone which theoretically means that anybody in Britain with a landline can be asked to take part. YouGov confines its polling to members of its polling panel on whom it has a lot of data and who can be asked to participate time and time again.

Both in their different ways seek to politically balance their samples – ICM by past vote weighting and YouGov through its party ID system. In addition YouGov weights by which newspapers panelists say they read.

But the big difference between the two is that ICM makes big adjustments to its headline figures based on its calculation on how certain it is that respondees will actually vote. Generally YouGov does not apply such a filter.

ICM’s voting certainty weighting is based on responses to two question: how people, on a scale of 1-10, rate their chances of voting and whether or not participants voted in the 2010 general election.

Uniquely amongst UK pollsters ICM discounts the value of responses of non-2010 voters by a half and this is a big reason why the firm has not had LAB at 40% or more in any poll since the election.

A second element is the way that ICM deals with those who say they will be voting but won’t say for which party. The firm allocates half of these based on what they did last time.

On general election day 2010 I question whether the “spiral of silence adjustment”, as it is known, was the right thing to do. In fact it enabled ICM to report a bigger LAB share than it would have done thus helping it become the equal top pollster in the polling accuracy table.

Two days after the election ICM’s ex-head of polling, Nick Sparrow, emailed to point out that I’d been wrong. I was forced in this post to eat humble pie.

PB regulars will know that for years I’ve regarded ICM as “the gold standard” whatever numbers they’ve produced. Quite simply the firm has the pedigree.