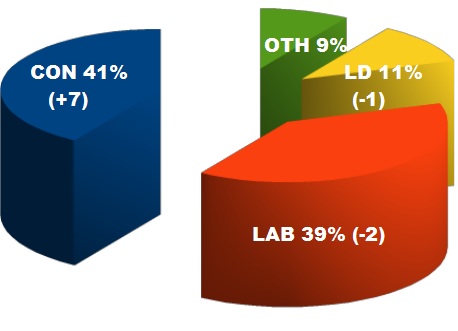 Where does Miliband stand now LAB’s no longer ahead?

The December phone poll by Ipsos-MORI for Reuters has been published overnight and sees a dramatic rise in the the Tory share to 41% to take a two point lead.

Fieldwork started on Saturday and continued until Monday evening so all took place after Friday’s dramatic news from Brussels hit the headlines and dominated the bulletins.

This means that all the firms that have surveyed since the veto now have either the Tories in the lead (YouGov last night and now MORI) or have the the blues and reds level-pegging (ComRes phone and Survation).

The last ICM poll taken at the end of November also had the Tories with a 2 point lead.

What’s even more remarkable is that this is happening only a fortnight after George Osborne’s dramatic autumn statement setting out a bleak set of economic forecasts.

All this sets the scene for tomorrow’s parliamentary by-election in Feltham & Heston – which in normal circumstances should have seen Labour romp home with a very comfortable majority. Could a less than emphatic performance there put pressure on Ed Miliband’s position?

What’s underpinned the LAB leader’s standing in the party has been the solid poll leads. Now that’s changing will the doubts about whether they made the right choice in September 2010 be raised again?

What seemed a humdrum by-election only a few days ago could have a wider political significance.