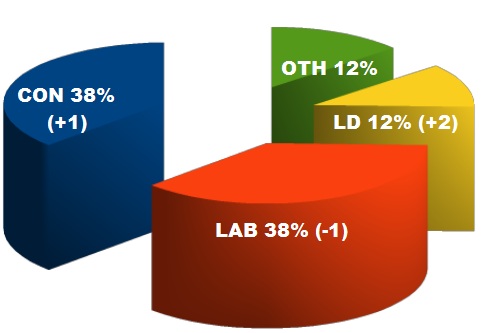 There’s a new ComRes telephone poll out for tomorrow’s Independent which sees the Tories up one and Labour down one so that they are now level-pegging on 38%. The Lib Dems, meanwhile, move up 2 from the last such poll at the end of November. The changes are, of course, within the margin of error.

Note that comparisons are with previous ComRes phone polls and NOT the firm’s online polling.

All the fieldwork took place after the news from Brussels came out and this is the first telephone poll to report.

The Tories will be pleased to have moved upwards while the Lib Dems will be reassured that the impact of their post-summit confusion has been positive rather than, as might have been expected, negative.

Maybe this is simply down to the party getting so much news coverage?

Asked whether the Government should not increase public borrowing any further and should pay off the nationâ€™s deficit as soon as possible, 74% agree and 18%. A majority of LAB voters (58%) endorse this approach, as do 73% of Lib Dem supporters and 87% of CON supporters.

ComRes also asked people whether the Government should borrow more in the short term to increase economic growth even if it means reducing the deficit more slowly â€“ broadly in line with Labourâ€™s approach. Some 49% agree but 40% disagree.

UPDATE: YouGov has the Tories with a 2 point lead

This is the first Tory lead from the online pollster in a year.