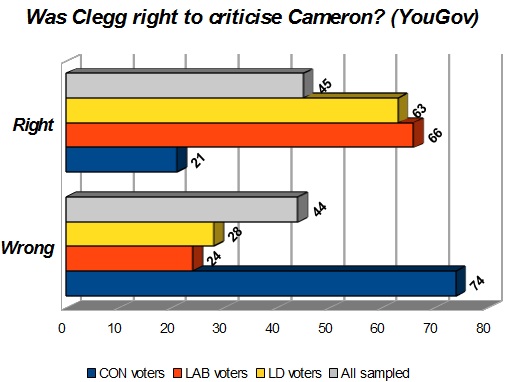 In today’s YouGov poll respondees were asked asked a range of questions in relation to Cameron’s EU veto and political developments since.

There’s one bit of the data that caught my eye – when people were asked “Deputy Prime Minister Nick Clegg has criticised David Cameron’s negotiating at the summit and said the veto was bad for Britain. Do you think it was right or wrong for Clegg to publicly criticise Cameron in this way?

PBers, no doubt, will correct me if I’m wrong but this is the first time, surely, in any poll since the formation of the coalition that LAB voters have given Nick more backing than LD ones.

It will be interesting to see how this plays out in the leader approval ratings.