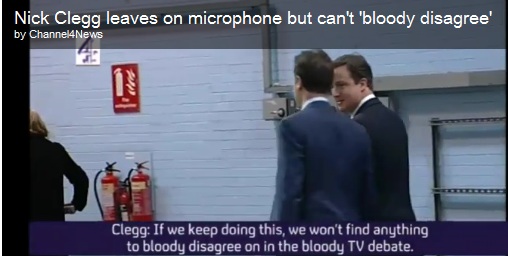 After a public meeting in March Nick Clegg quipped to David Cameron â€˜if we keep doing this we wonâ€™t find anything to bloody disagree on in the bloody TV debates.â€™ The comments were picked up on microphone riled some Lib Dems that a fixed-term coalition was now hardening into something more enduring.

Of course since then there has been a wide range of issues in which the Lib Dems have sought to present â€˜differentiationâ€™ with the Conservatives. However this weekâ€™s announcement on Newsnight by Danny Alexander that his party has signed up to George Osborneâ€™s pace of cuts even beyond the election undoes that. It could have political implications. Toby Young wrote the following day:

â€œThat was an extraordinary thing for Danny Alexander to say and begs the question of whether he had discussed it in advance with Nick Clegg. He was effectively saying that, when it comes to the cuts in 15/16 and 16/17, the policy of the Liberal Democrats going into the next election will be the same as the Conservatives. Not only will that limit the Lib Dems’ room for manoeuvre when it comes to differentiating themselves from the Tories in 2015, it will make it almost impossible for them to enter into a post-election pact with the Labour Party in the event of a hung Parliament.â€

Since then the official â€˜ally of Vince Cableâ€™, Lord Oakeshott responded with an interview with the Independent arguing â€œwe Lib Dems signed a five-year Coalition Agreement, not a seven-year one. If we are seen to be chained to the Tory mast past 2015, it will kill our chances of fighting the next election as a genuinely independent force, able to form a coalition with whoever the people decide.”

Whether the Lib Dems were right to enter a Coalition with the Conservative over a confidence and supply arrangement or not, the real political bargaining power of the Lib Dems is still surely down to their ability to be able to plausibly join either of the main two parties in the event of a hung parliament. Could Cleggâ€™s party join with Labour if they finished the largest party next time? I just canâ€™t see it.

It is worth remembering that to avoid total constituency carnage at the ballot box the Lib Dems will require tactical votes of a good number of Labour supporters in seats they are defending against the Conservatives. There are already a few anecdotal examples in local by-elections where this may have returned in the South of England. The logic of Alexanderâ€™s remarks flushed out into a general election campaign would surely change that leavnig the Conservatives the net winners.

Danny Alexanderâ€™s apparent commitment could also stoke the tensions between Cable and Osborne on how to engineer a recovery. In one of the slickest Labour speeches in the House since the last election on the economy, David Miliband yesterday concluded:

â€œLet me finish with this thought. The Chancellorâ€™s â€œlatest economic commentary shows just how out of his depth he is when it comes to important economic issues. Slashing spending now could push the economy back into recession and inflict further structural damage on the UKâ€.

It was a reminder, from what now seems the distant past, that there was not economic unity between the two Coalition partners on how to tackle the deficit in the months running up to the general election.

George Osborneâ€™s neat and tidy ambition to end the structural deficit by 2014 and share the proceeds of growth in the months before an election appears in tatters. The deteriorating economic situation has shunted a big political problem the way of the Lib Dems. Those off-air remarks from Clegg about not having anything to disagree with the Cameron over may prove prophetic yet also fatal for his partyâ€™s future.