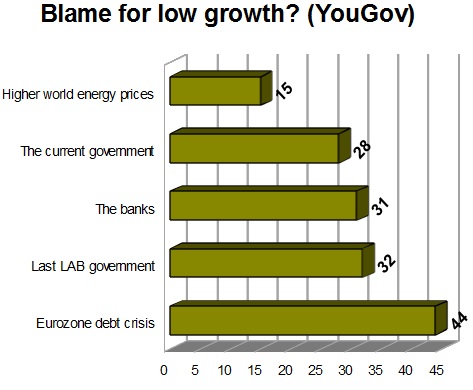 Have we lost confidence in all of them?

The above is one of the findings in the post Autumn statement YouGov survey and shows responses to the question:”George Osborne has delivered his autumn statement, in which the forecast growth of the British economy next year was reduced from 2.5% to 0.7%. Which one or two, if any, of the following do you think is most to blame for the low rate of growth?”

Given the news coverage of the Eurozone crisis it’s hardly surprising that that came out on top.

But Labour will be disappointed that 19 months into the life of the coalition it is getting more blame than the government and even the banks.

Other findings show that those saying that Osborne is doing a bad job as Chancellor is 49% to 24% saying good. After this year’s budget 34% told YouGov that he was doing a good job so there has been a sharp decline.

But Osborne’s lead over Ed balls on who would make the best Chancellor has grown. The poll found that 30% would now pick Osborne, with Balls on 24%, This compares with 25% to 23% in July.