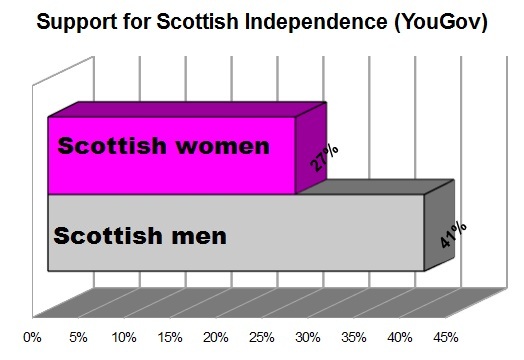 Why the gender gap on independence?

In recent weeks there’s been a lot of discussion about the gender gap in attitudes to the Conservatives and their leader, Mr. Cameron. Poll after poll has shown that men are more favourable than women.

Well Alex Salmond seems to have a similar challenge in Scotland over attitudes to independence – which will, of course, be subject to a referendum.

Men, it appears are much more enthusiastic than women – 41% to 27% in the latest YouGov polling north of the border.

As was highlighted by Professor John Curtice this difference has been seen before in other polling but now it has become particularly large.

He also pointed to the class difference on the issue observing that the SNP leader has to win over many middle-class voters. “Only 31 per cent of the former back independence, compared with 36 per cent of the working-class electorate.

My guess is that the former would be much more likely to vote in a referendum.

On the recent polling from ComRes highlighted by the SNP leader that had 49% backing independence Curtice observed: “Alas, what Salmond did not point out was that the ComRes poll was a Britain-wide survey that only interviewed 146 people north of the border.”