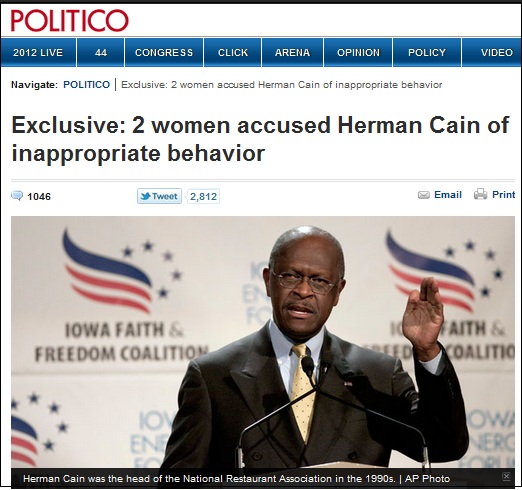 Is another non-Romney contender biting the dust?

There’ve been sharpish moves on the Republican nominee betting markets overnight following allegations on Politico that at least two female employees had complained about inappropriate behavior by Herman Cain when he’d be running the National Restaurant Association in the mid-1990s.

The report says that the women complained of “sexually suggestive behavior by Cain that made them angry and uncomfortable”.

Cain’s campaign has attacked the reports but it’s hard to conclude other than this could be the end of his unlikely bid for the White House. At one stage Betfair had him at 6/1 – the last price traded was just on 19/1.

Interestingly there’s been almost no movement in the Mitt Romney price who the markets still rate as a 65% chance – a level that I regard as far too tight.

The rush to Cain over the past month had never been convincing and I had kept out – but I’m still uncertain about Romney. The fact that he’s there almost by default isn’t encouraging for someone priced so tight. One of the other contenders, ex-favourite Perry perhaps, might re-emerge.

The first real voting in the prolonged primary process is more than two months off and a lot can happen in the intervening period.