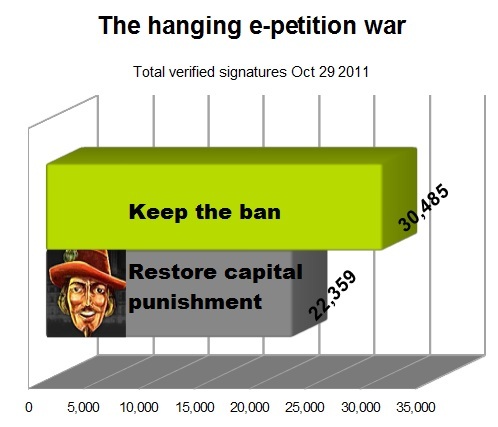 Isn’t the same thing happening on the EU

When Guido launched his e-petition on capital punishment three months ago I thought it an odd thing for his blog to be doing – but I had little doubt that he’d reach the 100,000 signature threshold within the laid down six month period. I was also confident that the anti-Guido move launched on the same day would get overwhelmed.

For whenever the restoration of capital punishment has been polled then there’s usually a big majority for bringing it back and surely there’d be 100,000 out there ready to sign up?

Guido’s move was helped by getting a lot of coverage in the national press as well as the strong backing of at least one paper.

The chart above shows what’s happened. Guido’s petition continues to lag behind and it’s hard to see it attracting enough support by early February to qualify for consideration for a commons debate.

The reason, I’d argue, is that supporters of the ban on hanging feel more strongly about it than those who want the death penalty restored.

Isn’t this a bit like attitudes towards the EU – something that we’ve argued about a lot this week? People might be opposed and tell pollsters that they want out but what evidence there is suggests that they don’t feel that strongly about it.