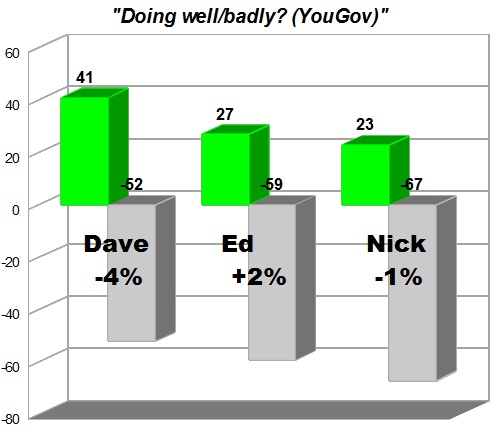 The chart shows this week’s leader ratings by YouGov for today’s Sunday times with the figure highlighted being the net change for each on a week ago.

Given the way the commons EU vote has been reported the Cameron camp might have expected something worse than just a -4% net change. The voting intentions in the poll had 39/36/8. UKIP were on 7% just one point behind the Lib Dems.

The VI question, like with all the pollsters, asked how people would vote if there was an “election tomorrow”. I wonder when they are going to switch from the theoretical to the actual.

I suspect that this would produce a massive increase in don’t knows.

Still the purpose of VI polling as well as the regular leader ratings is to take the political temperature.