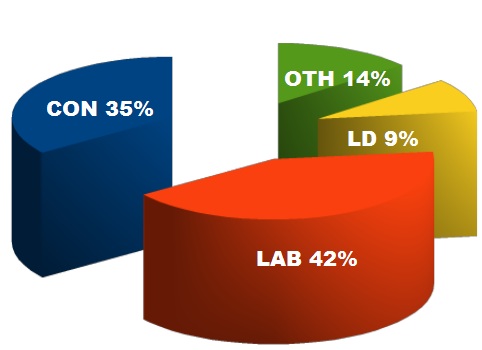 Are we seeing the polling impact of Monday’s vote?

The overnight YouGov poll for the Sun saw Labour move to a seven point lead over the Conservatives – the largest gap since the firm changed its weighting methodology earlier in the month.

A deficit of seven points is a big margin particularly as the Tories need to be at least seven points ahead to have any hope of securing a majority.

In the past I have not given too much emphasis to the daily poll but the latest weighting changes have added to my confidence.

You should never, of course, read too much into one poll but I wonder whether we might be seeing the polling fall-out from the big EU vote in the commons.

Not only did the blues come over as being split but as Michael Ashcroft observed in ConHome because “it suggested to ordinary voters that the Conservatives are far away from them when it comes to priorities â€“ the most important issues facing the country, and their families.”

“..The point is not whether they agree with us over Europe: the sceptical Tory view, articulated over many years by William Hague and others, is close to the centre of gravity in public opinion. The question is whether it matters to them as much as other things matter, and the fact is that it does not..”

We are at that stage in the polling cycle where there are not many other national polls about so it might be a little while before we see comparative data.

Betfair, meanwhile, still has a Tory majority as favourite as the next election outcome.