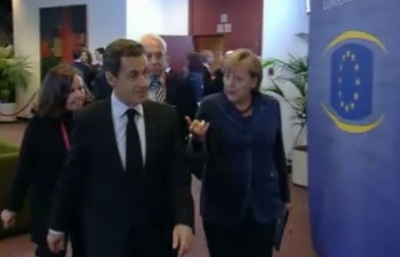 A guest slot by Robert Smithson

If you read The Telegraph, or the pb.com commenters, you could hardly fail to come to the conclusion that the Euro has been a disaster for all involved. Riots in the streets of Athens, austerity in Ireland, and the bumblings of Euro-summits serve only to reinforce the view. Yet, as always, the truth is rather more nuanced.

Since January the first 1999, when the Euro was introduced, GDP per head in the Eurozone has grown at much the same rate as the US, the UK or Japan. Sure, there are developed economies with higher growth rates (Canada, Norway and Australia spring to mind), but by and large these were beneficiaries of the last decadeâ€™s resources boom.

Source: Bloomberg
All data is constant currency, 2010 US$

Of course, such growth is not always sustainable. If we had Greece on the chart, it would have shown the fastest rate of expansion, powered by a massive 100% increase in debt-to-GDP. Letâ€™s see how much better (or worse) the same economies fared in terms of expansion (or contraction) of debt loads:

Change in debt-to-GDP, as % of GDP

Hmmm: so Eurozone debt as a % of GDP has increased less than in Japan, the UK or the US, with some spectacular performances from the Belgians, the Finns and the Spanish. (Perhaps one might suggest: the issue was more the level of indebtedness going into the Eurozone in 1998, rather than the absolute performance of the economies in the dozen years since.) And, by the way, overall debt loading in the Eurozone is no worse than in the other major economies (with the group as a whole, being a little behind the USA and Japan). Interestingly, those Eurozone countries with the worst overall debt positions (Greece being the glaring exception) did best at stabilizing or reducing their debt to GDP â€“ notably Belgium and Italy.

But there must be some area where the Eurozone economies have been particularly terrible, right? How about unemployment?

Thatâ€™s right: since the start of the Eurozone, Italy and Germany have seen remarkable falls in unemployment, while the US, Ireland, Spain and the UK have seen substantial rises. Of course, one might point out that the US (or Ireland, for that matter) started with much lower unemployment rates than Germany or Italy… but even that doesnâ€™t hold up particularly well: Italyâ€™s unemployment rate is 7.9%, Germanyâ€™s is 6.6%, and the United States is at 9.1%. This is not to deny there are some serious unemployment blackspots in the Eurozone: Spain has unemployment of 20.9% – a similar level to Scotland in the 1980s, and that country at least had the benefit of big fiscal transfers from a wealthy neighbour. (Although itâ€™s worth mentioning that stultifying labour regulations in Spain mean that many â€˜casualâ€™ jobs never get reported in official statistics.)

But there must be something for the Eurosceptics to hold onto right? Continental Europeans have to hate the Euro, yes? Well, letâ€™s look to the most recent elections in Germany, to Berlin regional government. There, the national governmentâ€™s junior partners, the free-market FDP, took a radical Eurosceptical line (which would still put them somewhat in line with Ken Clarke), hoping to benefit from dissatisfaction with the Greek, Portugese and Irish bail-outs.

How did they do? Well, they saw their vote drop from 9% to 2%. The â€˜Pirate Partyâ€™, whose sole policy position concerns the abolition of copyright laws, outpolled them two-to-one.