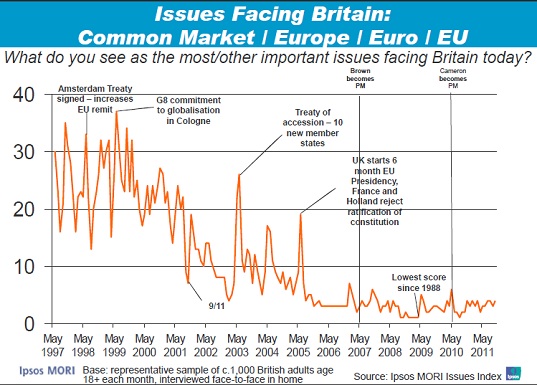 Once again concern about the EU barely registers

Anthony Wells of UKPR had the salient factor spot on in an excellent review of polling on the EU. Salience, how important people regard an issue, is something that always needs to be taken into account when trying to assess the political impact.

Yesterday the figure of 3% was being quoted. Since then we’ve got MORI’s October issues index and the level has risen one point to four as seen in the historical trend in the chart.

The detail of the poll shows that just one percent named the EU as the “most important issue” and that a further three percent listed it as another issue of concern.

Whenever I put this polling up there’s always a furious attack by Eurosceptic posters because nobody likes to be told that something the matters so much to them is only shared by a small proportion of the electorate at large. Their opposition is very similar to theLabour spinners who attacked the polling in 2006/7 that suggested that with Gordon Brown as Labour leader the party would be unelectable.