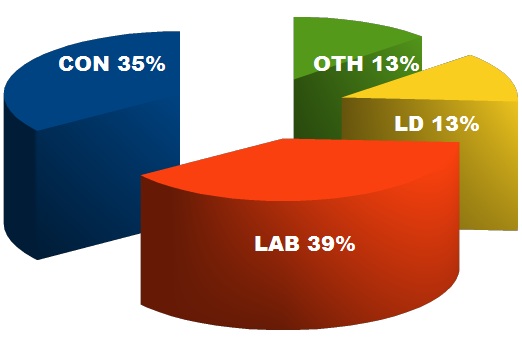 This from the firm that in August had the Tories ahead

While all the focus was on the vote in the commons last night the ICM October poll for the Guardian was published with more bad news for the coalition parties.

What’s really bad for them is that in both July and August ICM was showing a Tory lead. Since then Cameron’s party has dropped three, Labour has moved up four, the LD down four with the others parties gaining three.

The biggest losers in that time have been the LDs who are now, once again, at their lowest point with the polling firm that traditionally records better shares for them than any other firm.

The trend, Labour progress with the coalition parties slipping, is very much in line with other telephone polls. A week ago Populus had Labour with an eight percent lead the same figure as the Lib Dem share.

On the positive side the Tories continue to do well when those polled are asked to rate named politicians. On which team is better placed to manage the economy properly, 37% went for Cameron/Osborne, 26% Miliband/Balls. This factor continue to knock the gloss off Labour’s voting intention position.

The ICM fieldwork took place from Friday to Sunday – three days when the Tory EU split was getting a lot of coverage.