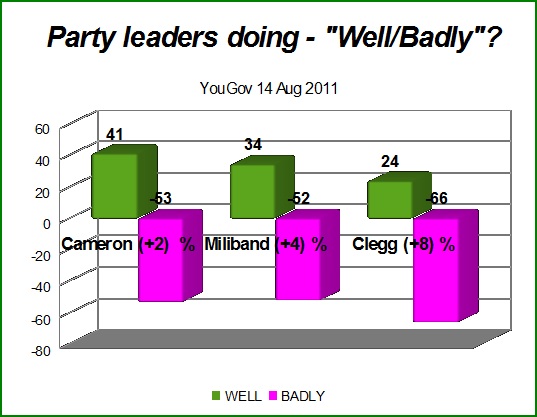 But all three leaders see improvements

The weekly leader ratings from YouGov are just out and all three see an increase in their “doing well” figures and a decline in the “doing badly” rating.

Whether this is down to the riots is hard to say. Last week’s polling took place while all three of them were on holiday.

YouGov found that just 3% of its sample named spending cuts when asked what was the main cause. Top of the list was criminality at 34%, gang culture at 20% with bad parenting on 19%. A total of 8% said social deprivation and 35 said unemployment.

This is in contrast with Comres for the Indy on Sunday last night which had 50% agreeing with the statement that the cuts were responsible. A lot of the difference is down to the poll format and the fact that YouGov was trying to get people to state the main cause.