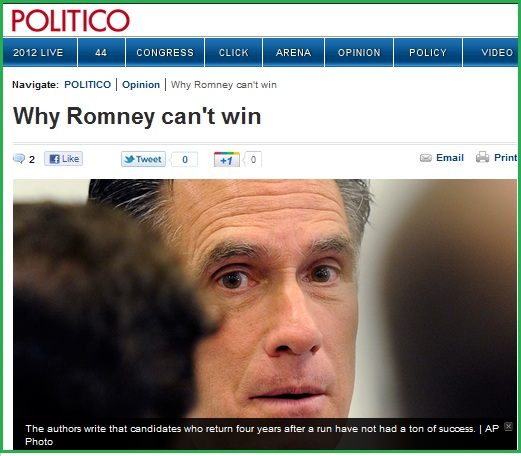 Will GOP voters view Romney any differently in 2012?

The influential US site, Politicos, has an article up under the provocative title “Why Romney can’t win” in which the authors look at the fate of previous losers in White House races when they’ve sought to run four years later.

Paul Goldman & Mark Rozel recently set out what they described as their first law of presidential motion which applies to Sarah Palin: “Losing vice presidential nominees never win the presidency the next cycle“

They’ve now produced what they describe their second law of presidential motion which applies to Romney: “If you donâ€™t win your first campaign for president, you wonâ€™t be able to claim the big prize four years later.”

They list all those in the modern era who’ve tried to perform this feat and note that none of them succeeded. What White House aspirants have to do if they want a chance is wait for at least eight years before victory is possible as with Nixon, Regan and George H.W. Bush.

The reason that losers last time seem to struggle, the authors argue, is that there is an unwelcome element of â€œI told you soâ€ in coming back four years later and asking voters to admit they made a mistake.

I think that there’s something in that. It’s a bit a like painting that goes under the hammer at Sothebys and fails to reach it’s reserve price. In the trade that item is described as having been “burnt” and the owners will be advised to wait a few years before trying to sell it again.

In 2008, it will be recalled, Romney secured only 20% of the vote in the primaries and even fewer delegates. Somehow, looking at him, he is not the sum of his parts.

My money will be elsewhere.