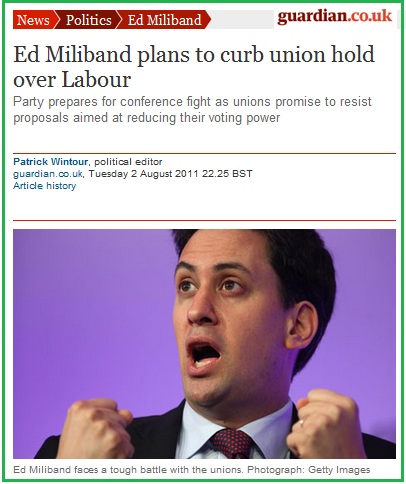 Would DaveM have dared to take on the unions like this?

The main lead in the Guardian this morning trails what’s likely to be a massive battle within Labour as Ed seeks to reduce the power of the big unions – those who used their power and influence to get him into the job in the first place.

The leader is pressing forward with a range of reforms that would blunt the power of the big unions at Labour party conferences and also dilute their influence in leadership elections.

The report quotes one of those involved in drawing up the proposals : “We cannot go on with a system in which unions have 50% of the vote at conference, and just three general secretaries of three unions control four-fifths of that union vote. Currently, the union leaders are playing hard ball but they need to wake up.”

Fighting talk particularly as it was those three general secretaries whose actions last year were decisive. So what’s coming out of the leader’s camp looks very risky especially as it comes after a big defeat for Miliband over the choice of the party’s new general secretary.

How different this all seems compared with the general view after Ed beat his brother Dave to the job in the leadership election last September. Then the perception was that Ed would be in hock to the three mega unions whose actions brought him victory.

I just wonder whether David Miliband would have followed a similar route with the unions if he’d been victorious.

What marks Ed out is his willingness to take political gambles which he could lose. He did that when he fought his elder brother last year and is now doing it with the unions.